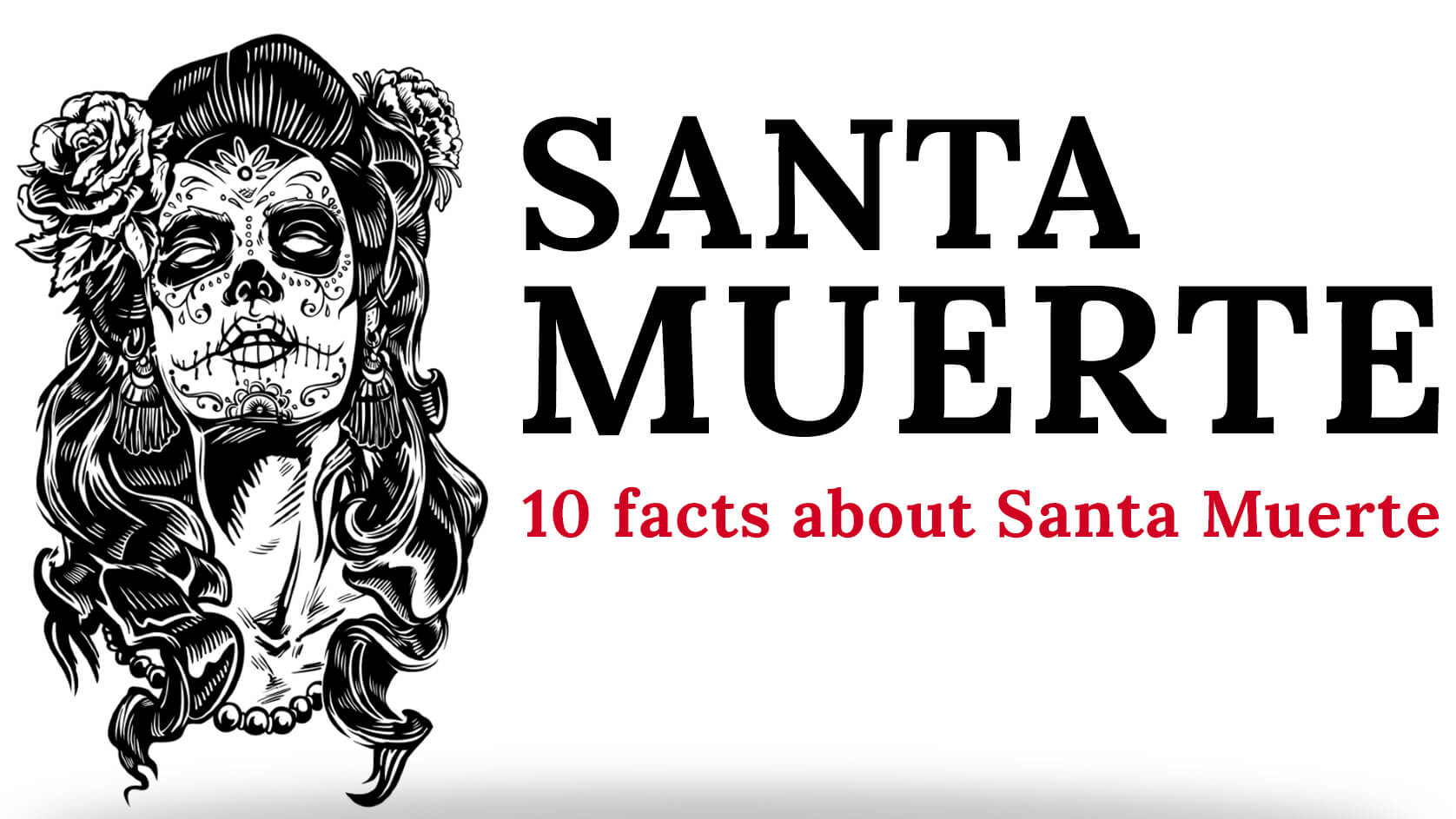 There are said to be between 2,000 and 10,000 saints in the world (according to the Catholic Church, a “saint” is a person who lives in heaven). But among these saints, only some are commemorated and celebrated, while others have been forgotten throughout history. Santa Muerte, or the Saint of Death, is a Mexican saint who represents death, agony. ☠️ She also serves as a figure similar to Hades in ancient Greece, the god of the Underworld. This character in Mexican folklore has a long and rich history as a religious entity, dating back to well before the Spanish conquests in North and Central America. By the way, you can find here our best Santa Muerte T-Shirt !

Various cultures have sought to personify death in different ways, from the Dance of Death in the Middle Ages to the Mexican Day of the Dead and others in different parts of America. Death has been given many faces in many different ways.

Here are ten facts about Santa Muerte, the Saint of Death, one of the most fascinating symbols of death that humanity has ever believed in.

Santa Muerte, although technically a goddess, has a striking resemblance to the Grim Reaper that we know well. Most often depicted as a large skeleton covered in black, this figure often carries a scythe and sometimes a pocket watch or a scale. The figure is also associated with all the characteristics of the art of death:

9) Everyone Meets the Angel of Death

In a very real way, believers in Santa Muerte as a figure in their lives, as a saint or goddess to follow, subscribe to the idea that death is the ultimate equalizer. It doesn’t matter if you are rich or poor, good or bad, kind or downright evil. One day, at some point, Death comes for you! ⚰️

This great equalization has earned Santa Muerte a large number of followers of all types, in a wide selection of people, from the most conservative to very progressive crowds who feel rejected by the Catholic Church or the governments of the states under which they reside, and across almost all social classes.

The cultural roots of Santa Muerte are rich, long, tangled and complex. It is a fusion of European traditions, including the Grim Reaper and the Dance of Death, with indigenous American traditions. Although not officially recognized by the Catholic Church, this dark and sinister figure has roots that go back to the personification of death and the cult of death in Aztec culture.

The Aztecs were obsessed with mortality, death and the afterlife. So it’s not surprising that when the Spanish conquistadors arrived, these two cultures merged to create something very interesting: Santa Muerte. Here are some stanzas from an Aztec poem written in the mid-1520s, after the arrival of the Spanish:

These words are some of the roots of the modern version and fusion that would become Santa Muerte, going back to a distant time, to reflections on death and mortality that took place long before the beginning of our time. But long before these words were even engraved, the Aztecs worshipped a goddess of death named Mictecacihuatl.

They celebrated her on an occasion that is very similar to today’s Mexican holiday, Dia de los Muertos, literally “Day of the Dead“. After the arrival of the Spaniards in Mexico and the beginning of the conversion of the natives to Catholicism, the date of the feast was moved in the calendar to coincide with All Saints’ Day and the Day of the Dead, November 1st and 2nd. The two holidays were then forever merged in Latin American culture.

7) Celebration of the Day of the Dead

Santa Muerte celebrations take different forms in different regions and are quite widespread. As the Aztecs originally did, today Santa Muerte and Dia de los Muertos are celebrated with :

All with a dark and morbid theme, where practitioners embrace the nature of death, not as an end but as a transition from one form of life to another. Those who celebrate this holiday not only grieve as they miss their deceased loved ones, but also rejoice in their loved ones’ journey to what they believe to be another existence. It is also a time for them to meditate on their own death and the nature of existence itself.

What happens when you die? This is a question that mankind has faced since time immemorial. Those who believe in Santa Muerte as a figure to follow, prefer to take this kind of question head on instead of running away from it or deflecting it.

During these Day of the Dead celebrations, as well as at other times of the year, Santa Muerte devotees set up places of worship and shrines dedicated to “the Lady”. There they seek and find consolation and comfort for their beliefs. Unlike the European Grim Reaper, this goddess is loved and worshipped, just like Hades. 🔱 She is considered the one who opens the doors to a better spiritual world.

Alcohol, incense, candy and other delicious foods are consumed in the cult of Santa Muerte, Our Lady of the Holy Death. The figure of Santa Muerte wears different colored robes for different reasons during the prayer. It is believed that this goddess can grant favors and achieve what a practitioner can see in a dream. White robes are a symbol to signify or request purity, red robes represent either passion or love, and green robes represent justice. There are also amber robes for health and black robes for protection.

There is a deep and ancient connection that traces Santa Muerte’s lineage back to the ancestors of the Colombians and links the goddess not to death but to love. It has been noted that Santa Muerte began her career as a goddess and practitioner of love magic. This is a way for a devotee to obtain the affection of the person he loves so desperately. A poem written to the deity for this purpose, a kind of prayer, translated into English in 1947, has been found:

Thus, this goddess of death, this saint of the dead, also began as a figure who would terrify a target in order that she might love the being who felt unrequited love. A love such that the being would do anything to possess this sweetheart. There were many, many other prayers that were said to increase the chances of finding success in love through this Lady. One can imagine that they have become even more abundant with time.

4) Santa Muerte: In the Heart of the Mexican Cartels

Unfortunately, good things can only last so long before they are hijacked by people and perverted in their intentions. Such is the case with Santa Muerte, which, for better or worse, has also become a hit with Latin American criminals as well as street and prison gangs. It doesn’t take a genius to figure out why. With the narrative of darkness and death, the image of Santa Muerte is almost perfect for intimidation and terror, even though that is not at all the purpose of the original religious meaning. Thus, Santa Muerte has found itself on the front lines of the drug cartel wars.

The name of this character is still tarnished by the conspiracy and alarmist campaigns of the West. Warnings increase tenfold about the “dangers” of Santa Muerte as a cult threatening the Church, ✝️ the State or society in general. Fortunately, journalists as well as sane and moderate individuals see this practice for what it is. That is, a tradition, an expression of human existence, with a rich cultural heritage that spans thousands of years, and certainly not a manifestation of Satanism.

Some sources have even begun to trace the history of Santa Muerte back to mortuary rituals performed 100,000 years ago, which clearly indicates that humans are doing what they have always done, honoring their dead with mass graves and burial practices while meditating on their own death.

For those in modern times who have been ostracized, discriminated against, or marginalized, Santa Muerte has also been a support for minorities, feminists, the LGBT community 🏳️🌈 and other groups who have been victims of hate or violence. This saint, or goddess, depending on how she is viewed, has been a guide, a help for many to overcome adversity in times of conflict and personal challenge.

Disenfranchised people often find comfort and refuge in the belief in this saint. She is endowed with the ability to guide them, to help them make decisions to improve their lives and to ward off people who wish them ill. It is interesting that a figure that has been revered for so long, has become such a progressive icon for so many people today.

1) From Mexico to Los Angeles

Despite the attempts to make this saint and the festivals associated with it disappear, there has been a huge surge in popularity for Santa Muerte and Dia de los Muertos events. These events started in Mexico, spread to Los Angeles, and then to the rest of the United States. But this dark aspect of humanity’s expression is not to be feared.

For many, it’s just a pleasant diversion, and for others, it’s a source of inspiration and healing. Santa Muerte is actually one of the fastest growing religious figures in the United States. Festivals in its honor are plentiful, as individuals and families seek to have fun, but also to reflect on the definition of death. If you want your own Day of the Dead symbol, get the Mexican Skull Ring.

Are you interested in the gods of death ? Then don’t hesitate to go to this category of blog posts : Gods of death. I won’t be disappointed ! 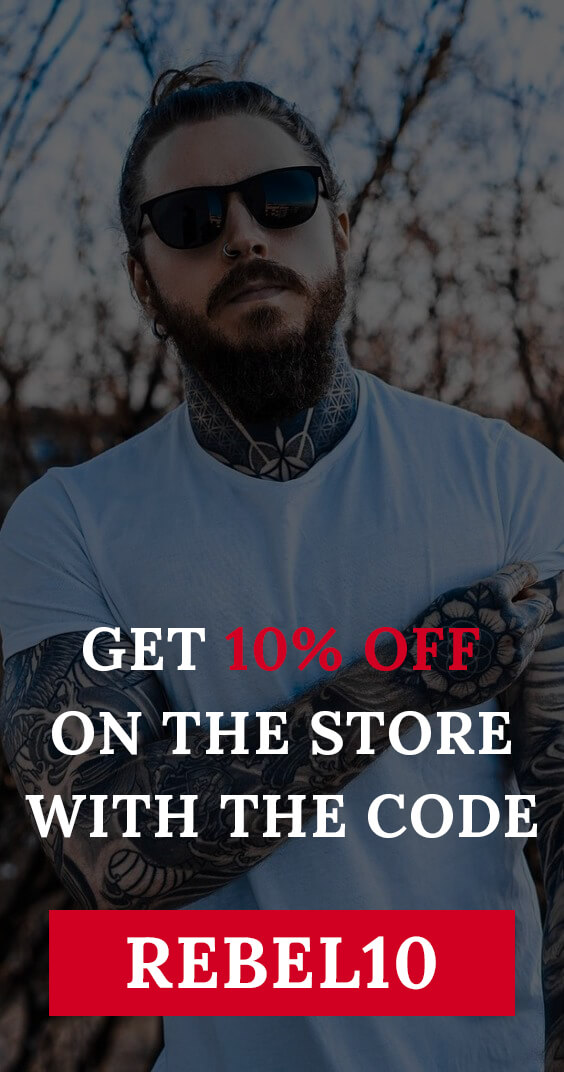